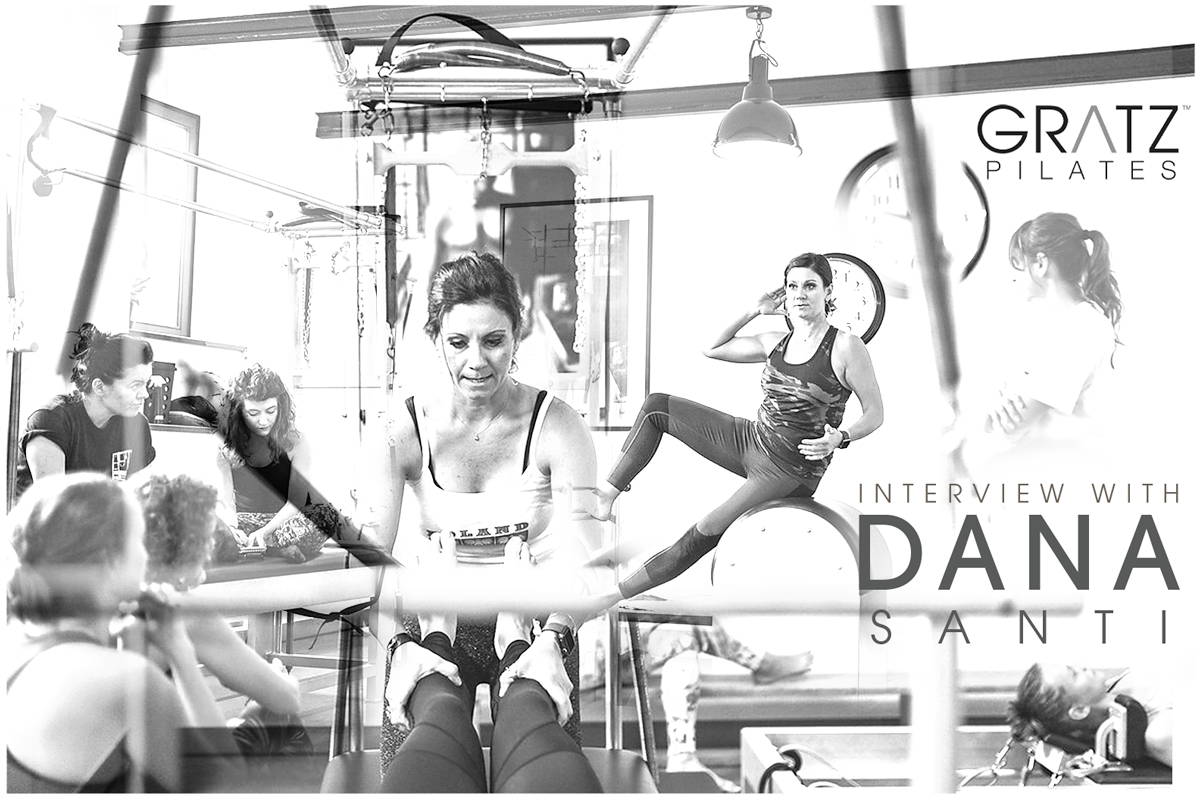 Gratz Pilates has initiated a series of interviews with some of our prominent instructors to allow them to tell their story and discuss the current challenges in our industry. We have featured interviews developed by Gratz Euro correspondent, Tavis Bohlinger, with Brooke Siler and Marjorie Oron and now we are proud to present an interview with our friend and brand ambassador Dana Santi. She has worked with Gratz for many years organizing conferences and workshops and teaching at Gratz equipped-studios all over the world. Dana is an amazing teacher with a wicked sense of humor which, combined with her work ethic, makes her classes special and we hope you enjoy learning about her in this interview.

The interview was conducted virtually by our talented designer in Philadelphia,  Jennifer Chung who had the opportunity to spend some time with Dana at the PMA event in Monterrey last October. 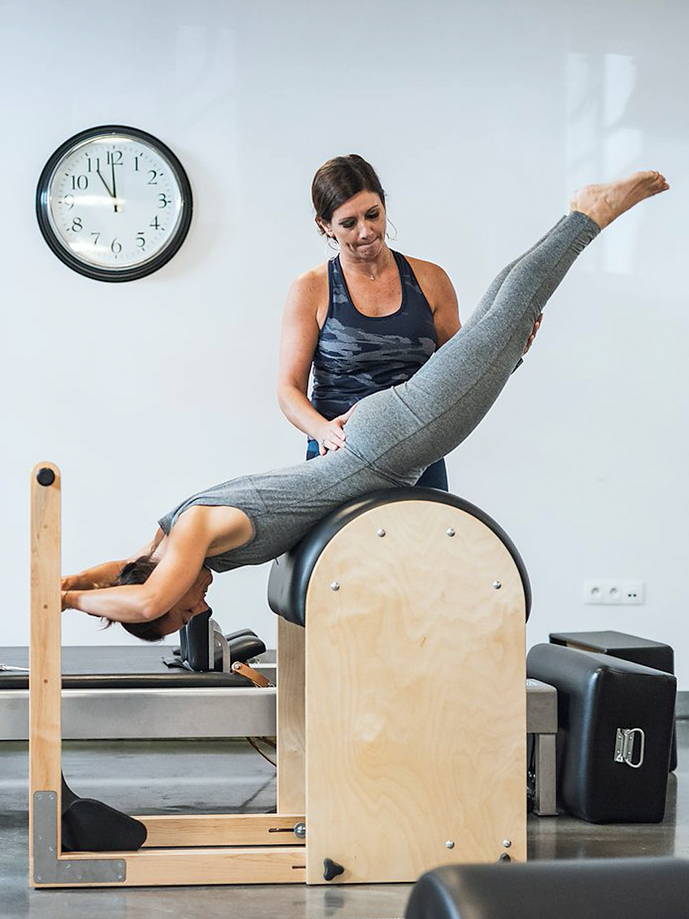 Dana Santi began studying the Pilates method in 1996 in Evanston, IL. She studied
under the direction of Juanita Lopez and was certified by Romana Kryzanowska in
1998. After completing her certification, Dana taught at and managed The Pilates Studio of The Midwest at Hubbard Street in Chicago, IL, a certification studio for what was The New York Pilates Studio® and The Pilates Guild™. In 2002, Dana opened The Pilates Core, Inc. in La Grange, IL. She has always believed that keeping Pilates authentic is what makes a successful studio. In 2004, Dana met and studied with Jay Grimes in Los Angeles, CA. That meeting changed Dana's life and she is honored to borrow every ounce of inspiration and wisdom that he can provide.
In 2016, Dana closed down The Pilates Core, moved her studio and rebranded as Dana Santi Pilates. This move has allowed her to teach more, travel, train and most importantly be there for her kids. Currently, Dana and her team have completed part 1 of the popular Project Return workshop series. Dana can be found teaching classes on Pilates Anytime and is an advisory board member and a founder of the Authentic Pilates Union. 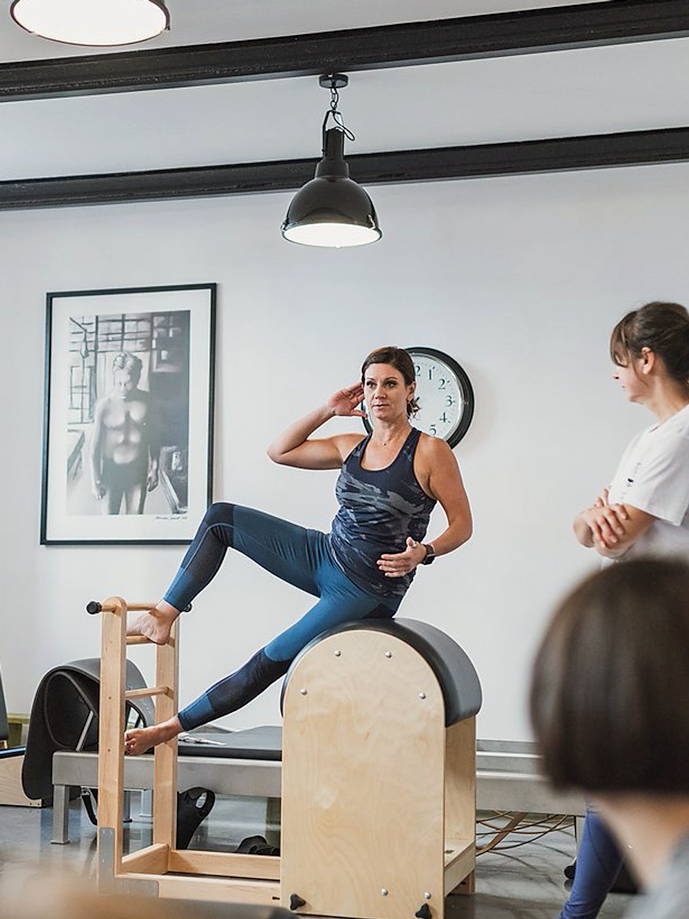 I grew up in a fairly active family: my mother opened a dance studio in 1977, and my father coached 7-8th grade football for over 20 years. I played sports and danced. When i was in highschool, my dad, mom, sister and myself began riding our bikes across Iowa every summer. I was an avid aerobics participant and when “The Step” came out, watch out! I knew by 19 years old that I was going to be paid to exercise. I just never knew what the exercise was going to be. I can remember thinking all through high school how cool it would be to work within an exercise community. 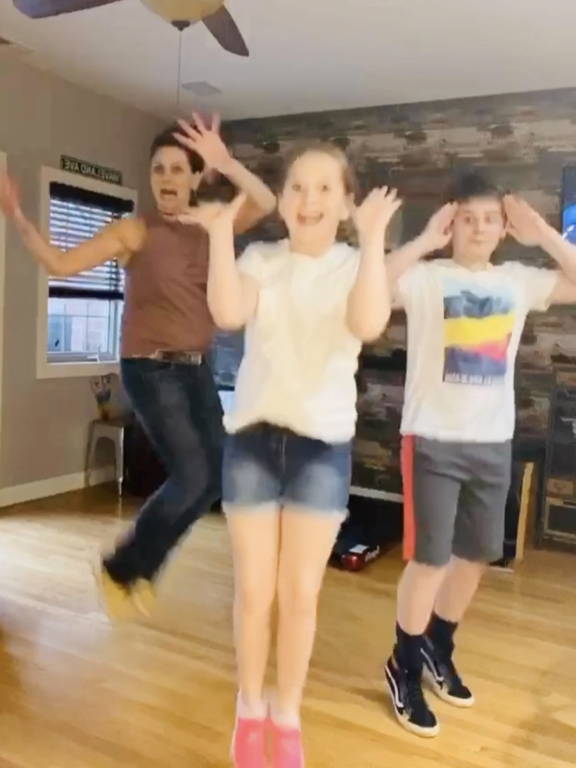 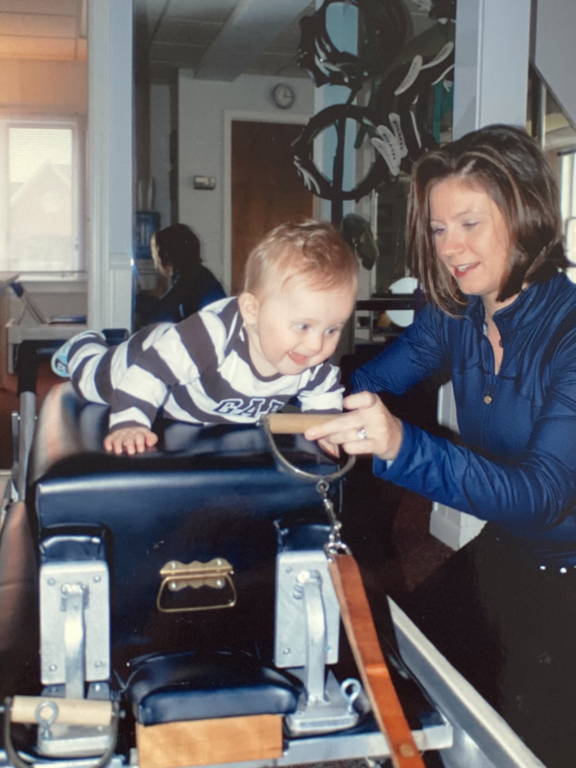 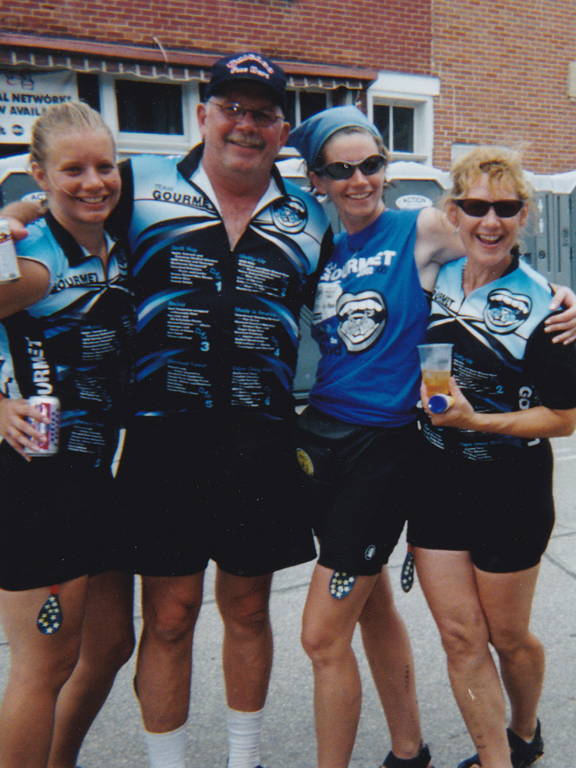 What brought you to Pilates? Please describe your evolution as a student, apprentice and certification, organizational alliances, etc.

In 1996, I took a Pilates mat class at the cultural center in Chicago. I know now that the teacher was an apprentice as he was reading off a sheet of paper. It didn’t seem to matter cause at the end of the class I had thought, "I don’t know what we just did, but I feel so good."
There were only a couple of studios in Illinois during that era. One of them was the Pilates studio of the Midwest in Evanston, IL. A training center offering what was Romana’s program at the time. I attended my first session. Aside being mortified and red faced that my pants were falling down during stomach massage, I still didn’t know what we just did, but again I felt so good.  I continued my lessons there and eventually started working withJuanita Lopez, who at the time was the teacher trainer there and went through their training program. I worked for the training center for 5 years. With that, i was afforded continuing education that no one could buy today. In 2002, I opened my own studio and soon after that met Jay Grimes and that changed my life. 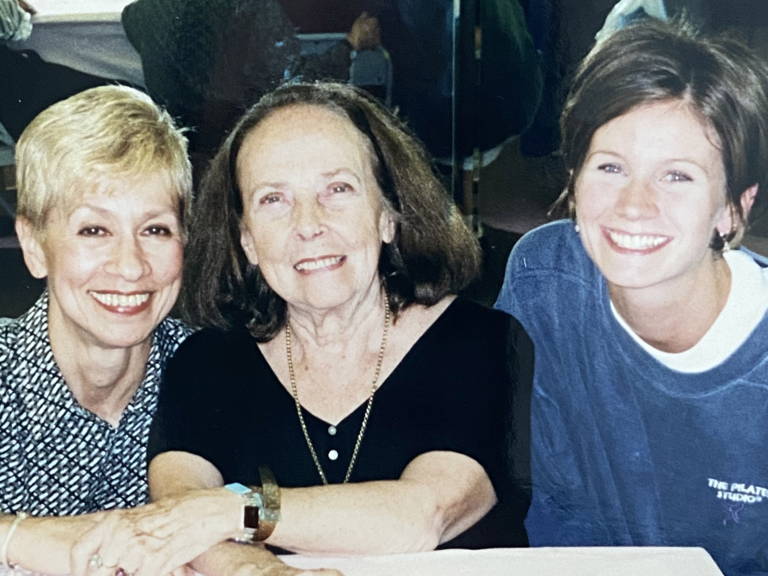 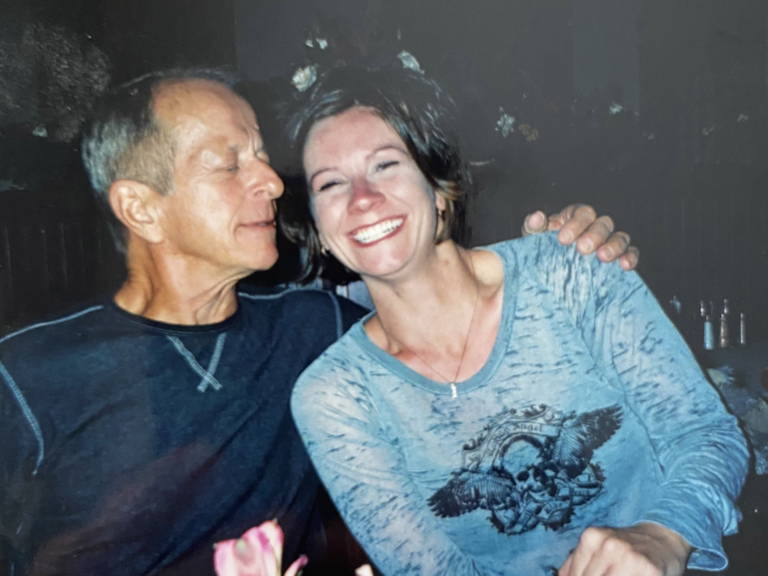 "Remember, this is Joe’s work. Those teachers interpreted to me what they were taught and how they understood the work. It was up to myself to create my own interpretation. We have opportunity to dissect what JoePilates was saying and what he meant the work to be."

What do you love about teaching Pilates and teaching clients? What about your training, teaching teachers, and how do you see yourself as a leader and influencer?

I absolutely know i was meant to teach this work. I love what I do and I am incredibly grateful for my clients and my team of teachers. They humble me, accept that my thoughts, presentation and expectations may change daily, and theirs may as well. Trust in those relationships are truly what has allowed myself and my team to “raise the bar” in our teachings. I love when my clients tell me they had a pain while out of the studio and they knew exactly how to fix it. Those moments are my wins.

I was fortunate in having an incredible Pilates education. As all those teachers helped pave my path in some way, Jay Grimes was the teacher that gave me permission to question. I understood him in a way that no other teacher was able to communicate to me. If it weren’t for him, I would not have ended up on the path I am on. Remember, this is Joe’s work. Those teachers interpreted to me what they were taught and how they understood the work. It was up to myself to create my own interpretation. We have opportunity to dissect what Joe Pilates was saying and what he meant the work to be. There is a direct line to his work through his writings. That should be the certification, training, advanced training that people should be flocking to. The best part is, you can do it yourself if you want. You are your best teacher.

I really never look at myself as a leader. I think I am a teacher with a loud voice and a Chicago accent that tends to travel through a room. What I would like to hope is that I can continue to challenge teachers to think for themselves and give them permission to humbly question what they learned. Was it Joe’s intentions? You decide, for you. Your interpretation is just as valid as mine…If you truly believe you are teaching Joe’s work. 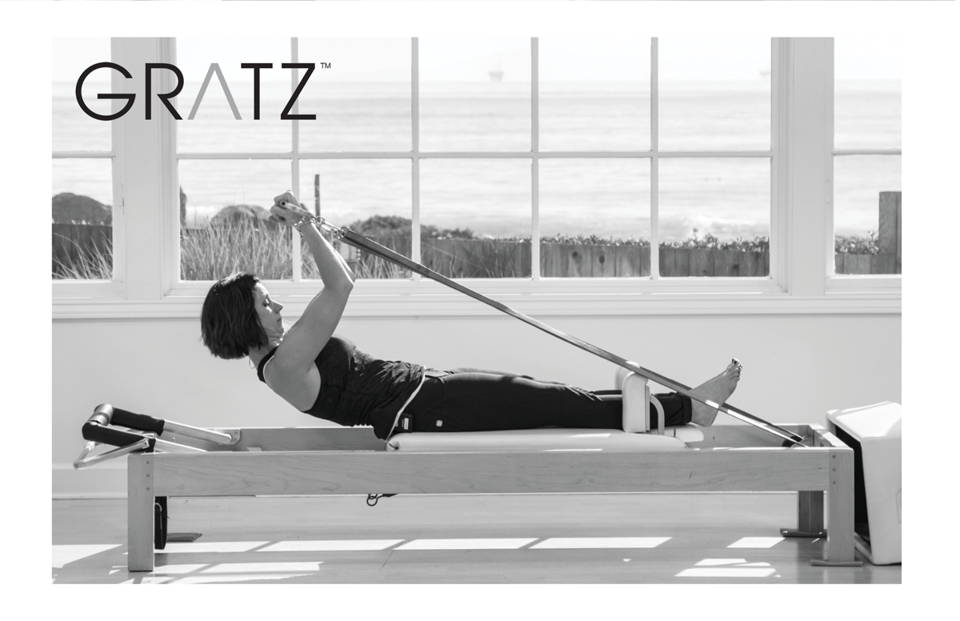 Due to the pandemic and global health emergencies, COVID has financially impacted the Pilates Community and particularly studio owners pretty hard - how are you dealing with the challenges?

My heart goes out to all Pilates studios and teachers alike. It is an awful and incredibly tiring time for everyone. How ironic that this method, that can be life saving right now, is being prevented from being taught at full capacity or taught at all. I have the same struggles as any other studio. I have been striped of all these other entities within my business that allowed for income. I wish I had the answer as to how to cope (that didn’t have the words Vodka, Tiktok or Fetal position in it), but I don’t. I can only hope teachers and practitioners alike remember not only does this method work us physically, it works us mentally and we may need that as a life-line right now.

How does gratz equipment fare with other brands?

The right equipment for me has always been Gratz. I believe the Classical Method can only be translated by using it. My teammates and clients are well educated in understanding how the equipment and exercises are so very intertwined. Joe set us up for success in so many ways. I trust the equipment as I trust the method. 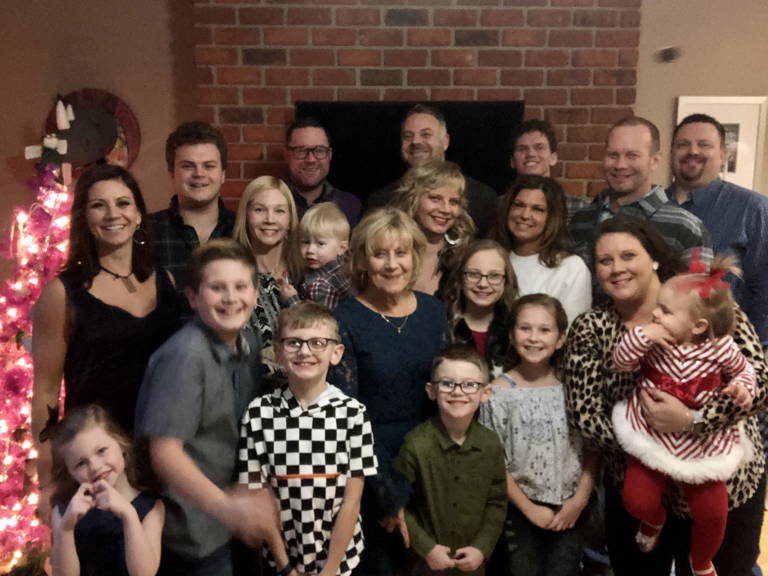 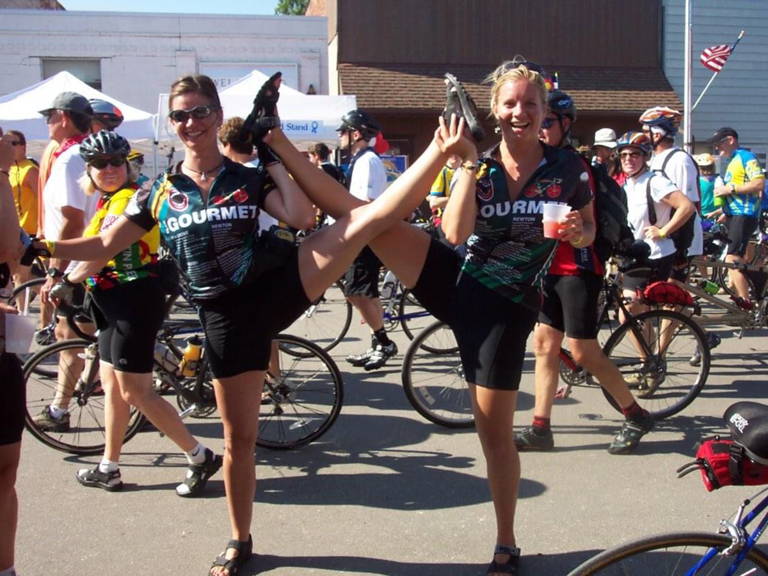 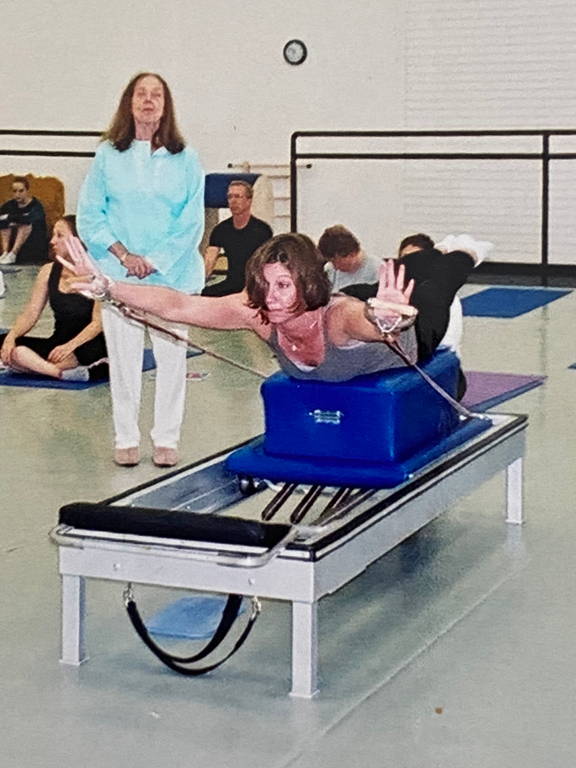 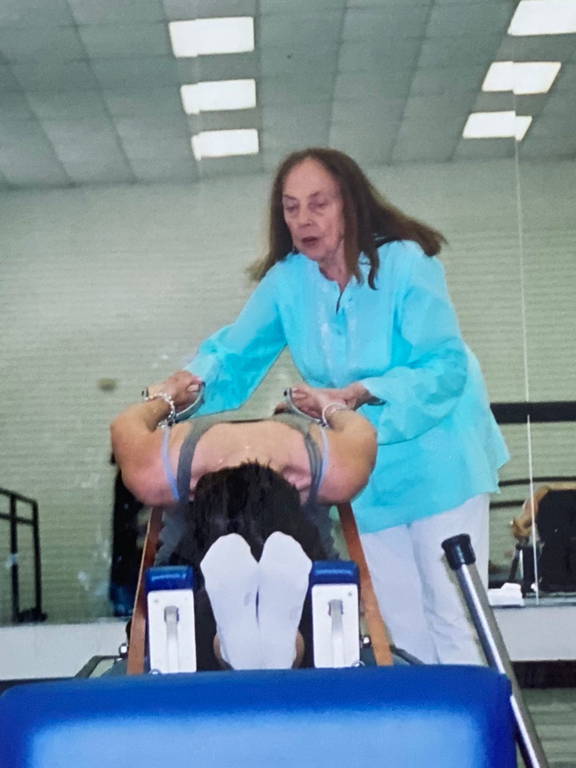 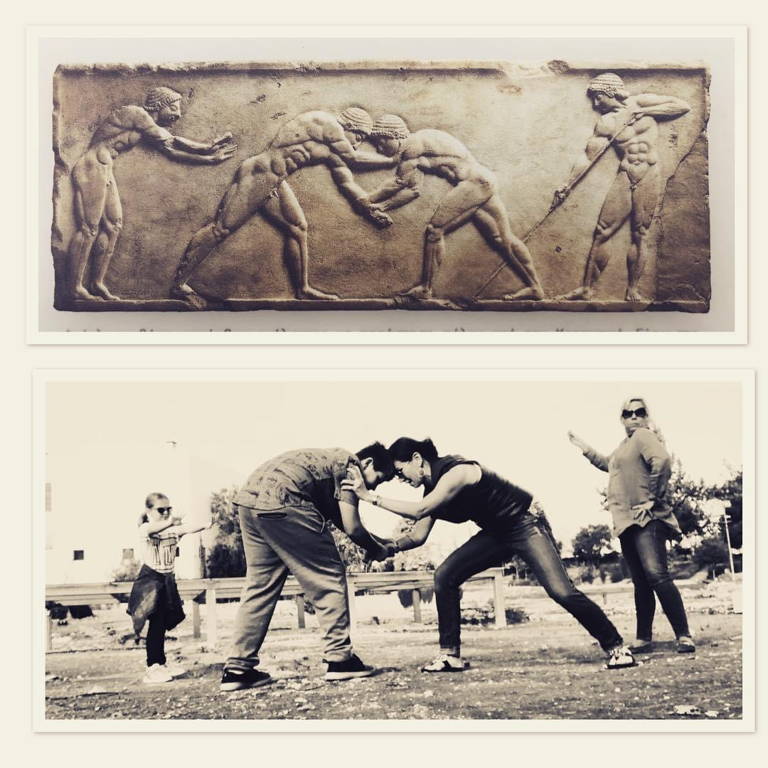